HANNOVER MESSE 2016 officially opened on April 25th. German Chancellor Angela Merkel and US President Barack Obama attended the opening ceremony. HANNOVER MESSE was founded in 1947. After more than half a century of continuous development and improvement, it has become the largest international industrial event of today, and is considered to be an important international event in connection with the world’s technical and commercial fields. More than 5,000 companies and more than 200,000 spectators from more than 100 countries and regions will participate in this five-day exhibition. The keynote theme of HANNOVER MESSE 2016 is “Integrated Industry – Discover Solutions”, which featured five parallel shows: Industrial Automation, Energy, Digital Factory, Industrial Supply and Research & Technology. Under the background of “Industry 4.0” proposed by Germany, one of the highlights of the exhibition is the human-machine collaborative robots in the Industrial Automation show.

JK7, a new generation of human-machine collaborative robot with independent intellectual property rights developed and produced by JK Robots Technology Co., Ltd., was released at this exhibition. It is also the first time that Chinese manufacturers in this field made their debut at HANNOVER MESSE. This uniquely shaped robot consists of seven modular joints that combine sensing, control and drive. Compared with traditional industrial robots, it is not only lighter, but also more dexterous and agile. It can meet the diverse individual needs of today’s industrial manufacturing and rapid deployment. The torque sensor embedded in each joint enables the robot to sense the force in time and respond quickly, making it safer to work with people to complete the task. The emergence of the new generation of human-machine collaboration robots indicates that the robot has been liberated from the protective fence, releasing more powerful production potential, and is the best choice for safe and reliable cooperation with people. 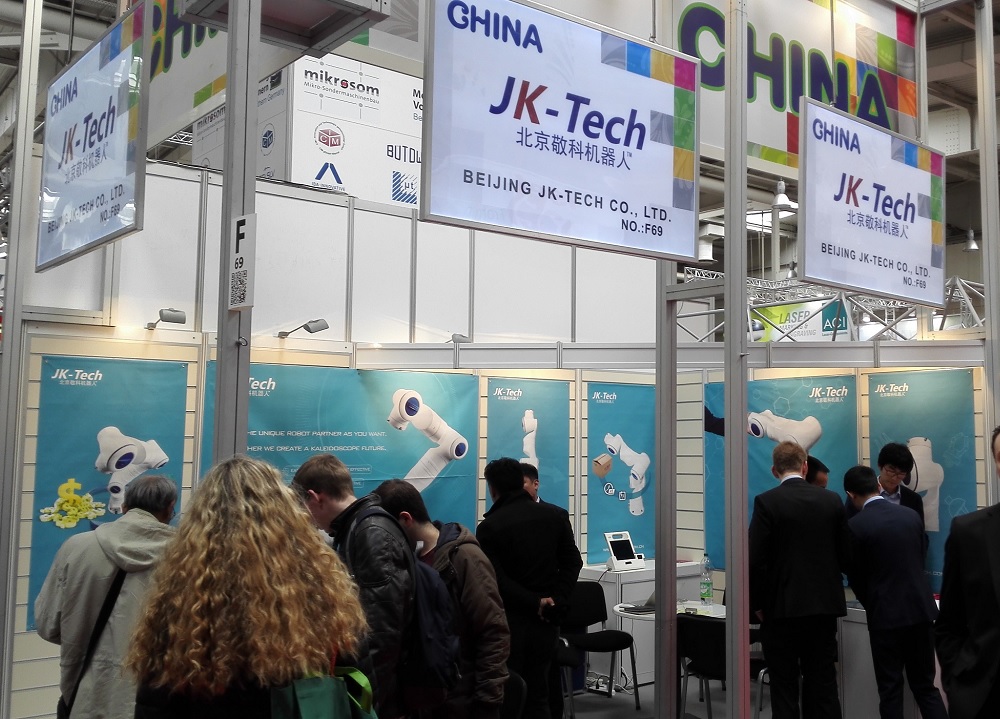